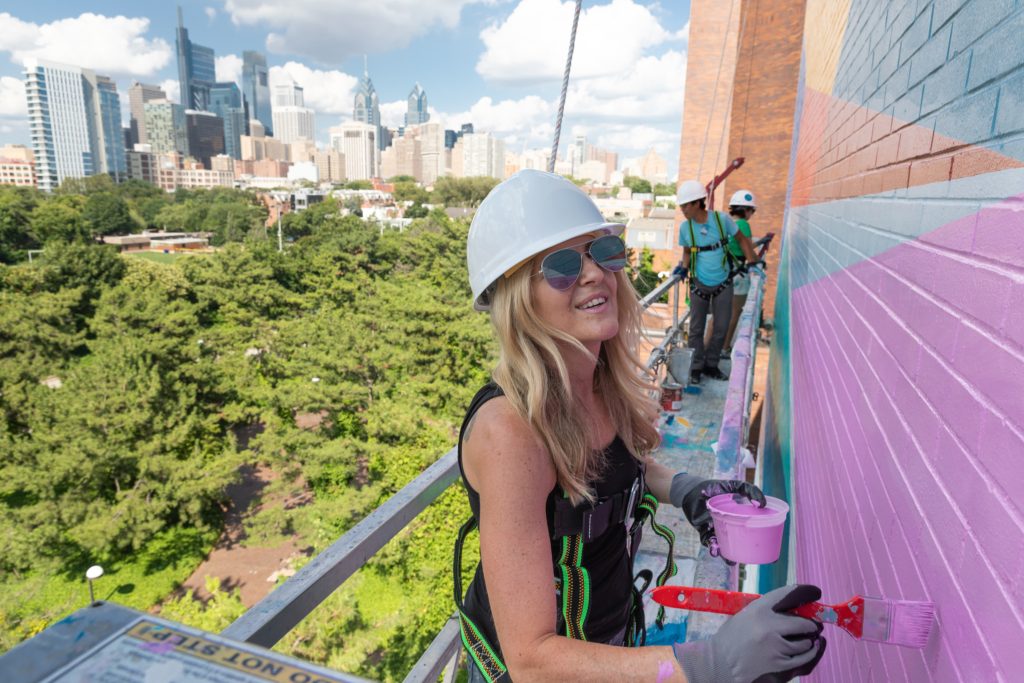 Rutstein is partnering with Philadelphia’s Mural Arts Program, the Bridgette Mayer Gallery, and AT&T, to create a 63 x 124′ mural on the AT&T Building in Philadelphia. “Convergence” will be seen from the Schuylkill River Trail and Banks Boardwalk, South Street Bridge, Schuylkill Expressway, and beyond into West Philadelphia.

JANE GOLDEN, EXECUTIVE DIRECTOR OF MURAL ARTS PHILADELPHIA:
“I am a wall hunter. I notice great walls in our city. The AT&T walls, rise above the river, above the new boardwalk, above our city. It was the perfect canvas for a work of art. So we are excited to say, in partnership with AT&T, Mural Arts is bringing this major work of public art by Rebecca Rutstein to Philadelphia. This building, through the magic of art, will be completely transformed from something unremarkable to an image of great beauty that captures the movement of the river, the lines of the boardwalk and the essence of the city.”

BRIDGETTE MAYER, DIRECTOR OF BRIDGETTE MAYER GALLERY:
“The gallery is thrilled to announce Rebecca Rutstein’s first public mural creation in Philadelphia. Ms. Rutstein will begin creating her large wrap-around mural at the AT&T building on the Schuylkill River Trail this week. This project has been underway for the past two years and now the City of Philadelphia and its residents will get to have this talented artist’s vibrant creation to enjoy along the waterfront! We are proud of Rebecca’s hard work and accomplishments leading to the culmination of this important project.”

“CONVERGENCE” WAS LAUNCHED JUNE 25TH, AND WILL BE COMPLETE WITH A RIBBON CUTTING IN OCTOBER.
“I’m thrilled to be contributing to the vibrant mural scene in Philadelphia, and to be creating something new in our city’s landscape. I have called Philadelphia home for most of my life, and it is a real honor to have my first, large-scale mural come to life so prominently along the banks of the Schuylkill River. I hope it will be enjoyed by the community for years to come, and I am thankful to the Mural Arts Program, AT&T and Bridgette Mayer Gallery for all of their support.”
– Rebecca Rutstein, 2019